skip to main | skip to sidebar

Liberation is the central conceit of the materialist. Ironically, he makes an exclusive claim on freedom and enlightenment by denying the existence of anything outside of the natural world. He maintains that the physical universe is all there is, it came from nothing or has always existed, and there are no limits to understanding or manipulating it. In this worldview man is a paradox. He is the accidental result of a random and undirected physical process over which he has no control but he is also the intellectual center of the universe. His authority supplants all other even though it is no more than the fleeting whirl of atoms. 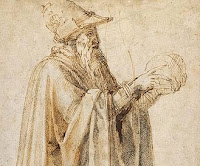 Built on a contradiction, materialism is nonetheless a brashly confident philosophy that has become dominant among the chattering class and in the academy. While it concludes that life is meaningless, this hopelessness is veiled in fearless optimism. Man is the ostensible measure of all things and his purview extends in all directions. This grants him the capacity for great discovery and conquest. In a free society, where he is not busy subjugating his fellow man as he is apt to do, his energies may be devoted to the continuous pursuit of knowledge or pleasure. Unencumbered by a higher authority, this pursuit is only limited by the rules that he imposes on himself.

Or so they claim. Try as they might, the materialist is vexed with a desire he cannot shake: the universal desire to worship. Man has always been eager to sacrifice his autonomy to venerate something that he perceives as greater than himself. This desire transcends every race and culture. It is the basis of every civilization. It has survived war, pestilence, prosperity, and modernization. It is even surviving materialism, with its unique insistence that there are no gods.

This innate need makes man qualitatively different from the animals. As Chesterton observes, the most advanced primates did not draw pictures of other primates or build temples to deities. But the most primitive men did. The development of art and religion is not traced gradually down through the ages. They appeared suddenly and cannot be explained by anything that came beforehand.

Materialists attempt to explain religion away with various theories. Some say it is merely our tribal instinct. We invent supernatural lawgivers to better govern our earthly affairs. Abiding by these proven rules ensures a more peaceful environment. Some say it is superstition arising from our survival mechanism. We subconsciously invent causes for why things happen to better adapt to our environment. Many of these causes are irrational. Some materialists are simply dismissive, predicting that religion will cease to exist once it is eliminated by natural selection.

Amidst all of these theories, one thing is certain: religion has always been and remains the center of man’s existence. As Western elites embrace secularism, Christianity is rapidly spreading in the developing world, even (or perhaps especially) in places where the church faces deadly persecution. Billions profess faith in Christ. In addition, Islam boasts of more than a billion followers while vast numbers of others practice a variety of faiths. Atheism has always been exceedingly rare or, as a scientist would say, statistically insignificant. It has a disproportionate influence today only because it is fashionable with the elite. Despite their protests, however, materialists themselves have proven incapable of sustaining their non-belief.

For centuries, preachers have warned their parishioners about the dangers of placing objects or ambitions ahead of Christ. Material things can easily become the focus of one’s life and enslave the beholder. In the modern West, these dangers are not wooden idols but expensive amusements or achievement itself. The importance of putting these things in their proper context has been vindicated time and again. The tragedies of the rich and famous, who destroy themselves on indulgence, dramatically illustrate the point.

But the love of mammon should not be confused with the darker practices that ensnare the secular world. Yearning for meaning, materialists have sought solace in all sorts of cults. Sociologists have found that self-professed non-believers are actually the most likely to embrace superstition and the occult.

For much of the twentieth century, communism and fascism were the two dominant ideologies that attempted to fill the void of secularism. Both sought to perfect man by remaking humanity and both became political movements led by cult figures who demanded total obedience. Their attempts to transcend our fallen world and establish perfection led to an unprecedented genocide. More than 100 million people were sacrificed to obtain a utopia that did not exist.

The whitewashing of these atrocities by academia is itself an atrocity. But despite relentless efforts to suppress the memory of what occurred, enough of the carnage is remembered to discourage the promotion of these ideologies, at least in the West. Many former communists and fascists have turned to other devotions. In their search for meaning, environmentalism has emerged as a popular dogma. Described as merely a healthy desire to be good stewards of natural resources, philosophical environmentalism is actually a form of pantheism, the ancient heresy that puts the created in the place of the creator. The earth is seen as a deity that demands our adoration and sacrifice.

Many environmentalists lament modernization and the exponential increase in population that has accompanied it. There were roughly one billion people in the world in 1800. Today there are almost seven billion. They see this development through a Malthusian lens, fretting that such growth cannot be sustained. For generations they have warned of imminent catastrophe resulting in overpopulation: there will not be enough food to eat and water to drink and few will have a decent quality of life.

In his celebrated polemic, “The Population Bomb,” Paul Ehrlich famously predicted that “The battle to feed humanity is over. In the 1970s, the world will undergo famines. Hundreds of millions of people are going to starve to death in spite of any crash programs embarked upon now. Population control is the only answer.” His dire prediction and dozens of others have been proven false, time and again. Yet environmentalists continue to seek dramatic reductions in world population.

This is because their desire to shrink the population is motivated by more than a responsible desire for sustainability. It is driven by a belief that the very existence of humanity spoils nature. A belief that is forcefully and repeatedly articulated by radicals in the movement:

Dave Forman, founder of Earth First!, declares that “Phasing out the human race will solve every problem on earth, social and environmental.” David Graber, an ecologist for the U.S. National Park Service, contends, “Human happiness, and certainly human fecundity, is not as important as a wild and healthy planet . . . human beings are a plague . . . some of us can only hope for the right virus to come along.” Dr. Reed Noss of the Conservation Planning Institute asserts, “The collective needs of non-human species must take precedence over the needs and desires of humans.” Yale professor Lamont Cole teaches, “To feed a starving child is to exacerbate the world population problem.”

A prominent environmentalist once told me that his parents made a foolish mistake by having two children. He and his colleagues view children as a selfish indulgence and lead an effort to increase sterilizations and abortions, particularly in the developing world where there are fewer restrictions on such practices. Another environmentalist I knew killed himself, concluding that he should not be taking resources from the earth. These people are not just a handful of lunatics. They are part of the movement's intellectual foundation, which rejects the notion that man has preeminence over nature.

Driven by this belief, they relentlessly seek to limit the human footprint through propaganda and coercion. Their campaign against global warming has persuaded governments and institutions worldwide even though it is based on a relatively tiny amount of unreliable and inconclusive data. Scores of independent scientists have shown the error in extrapolating such dire scenarios from the scant evidence that exists. Even some within the movement have acknowledged that the case for man-made climate change is tenuous. But that has not stopped them from using it to advance their goals.

Through national and supranational entities, which instinctively crave power, they work to enact policies designed to curtail industrialization. A recent United Nations document would confer special rights on “mother earth” that could be defended in courts of law. To the extent that such efforts have had an effect, they have brought tragedy, particularly for people in the developing world who benefit most from advances in agriculture, medicine, and sanitation. They have resulted in the spread of preventable diseases, brought untimely deaths, and reduced the quality of life of millions of people.

Like the useful idiots who sympathized with communism, millions support these goals of environmentalism. Like previous generations, they have been deceived by the fashionable dictates of the age.

Materialists, the self-proclaimed defenders of freedom and enlightenment, have been most susceptible to this latest heresy. This is because they reject the intrinsic worth of the individual. They insist that man is the measure of all things but their worldview holds that he is the result of chance, a finite being with no more value than a tree or a rock. In their desperation for meaning they have latched on to the worship of nature, which has shocking similarities to the child-sacrificing idol worship practiced by the ancient Semitic peoples. The commandments given to the Israelites stood in stark and refreshing contrast to this barbarism and laid the groundwork for the one who came so that all may have life, and have it more abundantly.